“I knew that when I married Michael Leko, we would have to live in Traverse City.” Robby, whose real name is Rosalba Montes, moved permanently to Traverse City in 2013. While she loves the beauty of the area, she began to miss her family and friends, as well as the food, flavors and culture she had left behind. “I had also left behind a business in Leon, Mexico, so it seemed fitting to open a business here,” she says. “I felt like it would bring some normalcy to my life and make me feel more at home in the United States.”

She began her business ventures in Traverse City by opening Robby’s Taqueria on Silver Lake. “I felt so happy and proud of my accomplishments. My goal was to bring a little bit of Mexico to this area. By opening my own Taqueria, I was able to share the tastes, smells and culture of Mexico that I miss so much, with the people here.” Many of the recipes that Robby uses are ones that she and her mother used when she was a child. In this way, she can stay true to her roots and always be reminded of home.

Due to the success of her first location, she was able to open a larger Taqueria at 830 E. Front Street, closer to downtown. Opening the larger location not only provided a platform to spread her love of authentic Mexican food to a wider audience, but allowed the addition of traditional Mexican drinks. “At our Front Street location you can not only enjoy the authentic Mexican food, but also traditional Mexican cocktails such as margaritas, palomas and micheladas. I was also able to increase the menu with different options that allow us to merge Mexican flavors with flavors that appeal to the American palate, while still remaining traditional dishes. Items like enmoladas, enchiladas, tortas and burritos give a very personal touch of our region.”

Following a belief in traditional Mexican fare, all food at Robby’s Taqueria is cooked and prepared at the moment it is ordered. Nothing is frozen or premade. All of Robby’s food is prepared with fresh ingredients, most of it local to the Traverse City area. “I think it is important for my restaurant to not only make fresh options a standard, but to also support the local economy,” Robby says. “Authentic Mexican food is not always fast or easy, but my food is much like Mexican culture: rich and full of flavor.”

“The way that my food is prepared is very important,” she says. “Cooking each and every item at the moment that it is ordered ensures freshness that is unparalleled, as well as giving each guest a personal experience. I want every person to leave my restaurant knowing that their dish was cooked just for them. The cooks take their time to make every dish the best quality. But the most important thing to me is something that is impossible to buy – passion and love for my food. Mexican food reminds me of home, reminds me of my childhood and reminds me that home can be anywhere. I am happy that I can bring a small part of Mexico to Traverse City with me.” 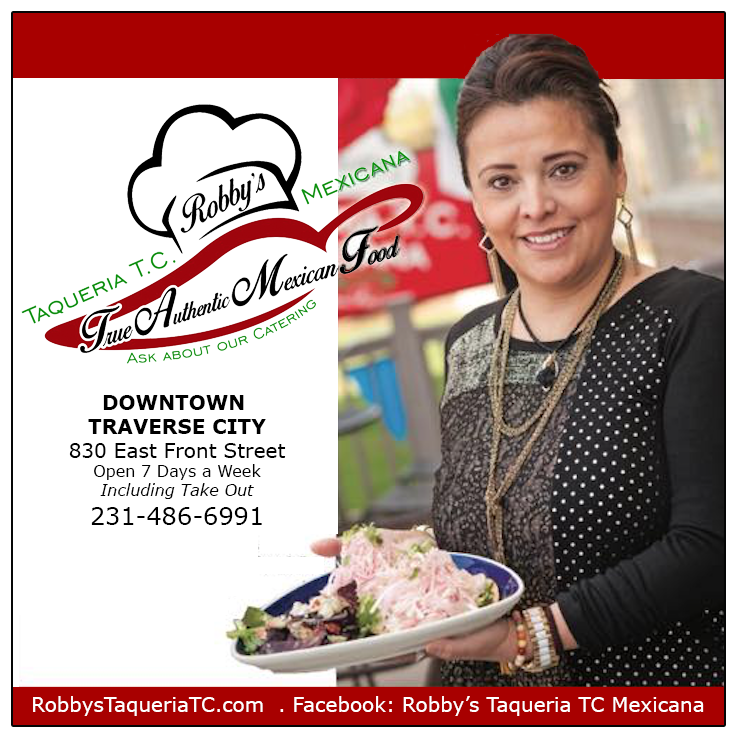